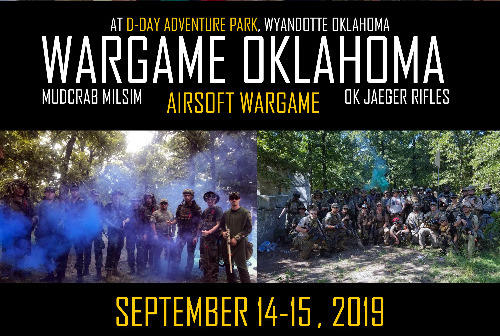 Online Ticket Sales are Closed at this time!

Tickets will still be for sale at the event at Check-In for $85. Cash or Card accepted. No checks.

This milsim event series mimics real military wargames in spirit as closely as possible. Its up to the players to determine what will happen in the game. In this scenario, the game flow isn’t scripted and your actions have real consequences on the outcome of the game no matter who you are. The event will feature air support and armor support mechanics, real military trucks for unit transportation as well as real cold-war era tanks and APC’s at the event.

When you sign up for the event, you will register as a member of a unit from either NATO or WARSAW which saw deployment during the time period the scenario takes place.

More info can be found at: http://wargameok.com/

This event has ended